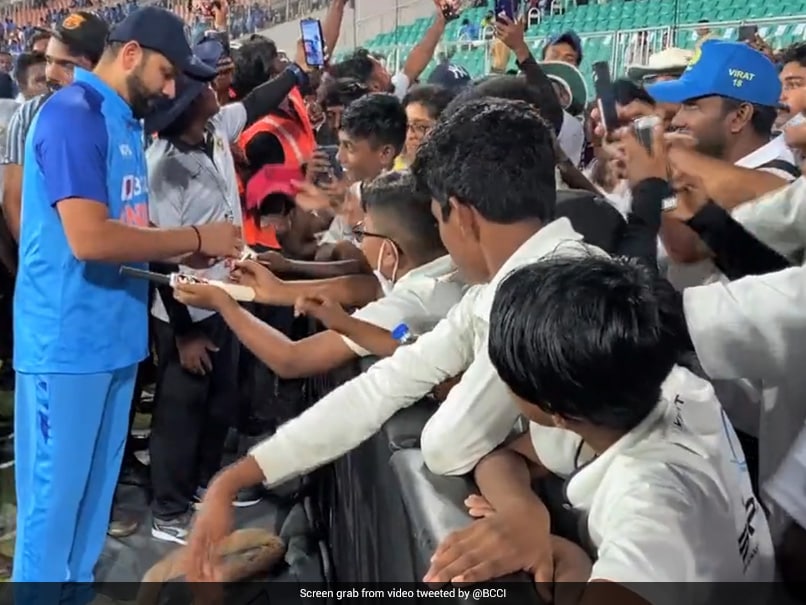 Team India had a night to remember on Wednesday, after they registered a magnificent eight-wicket win over South Africa in the first T20I of the three-match series at the Greenfield International Stadium in Thiruvananthapuram. The pacer duo of Arshdeep Singh and Deepak Chahar rose to the occasion and scalped three wickets and two wickets, respectively, to restrict the Proteas to 106/8. Later, KL Rahul and Suryakumar Yadav brought up their respective half-centuries to take India across the line in just 16.4 overs, despite initial setbacks.

Apart from this, there was another thing that caught everyone’s attention after the match and that was India skipper Rohit Sharma meeting his young fans in the crowd and giving them autographs. The kids and the entire crowd was overjoyed at getting to interact with the batting icon.

Just a little something for the fans here in Thiruvananthapuram, courtesy Captain @ImRo45!#TeamIndia | #INDvSA pic.twitter.com/K1dAWzqdA9

Coming to the match, Rahul played the anchor’s role, while Suryakumar Yadav came in after the wickets of Rohit Sharma and Virat Kohli and went on to put the pressure back on South Africa’s bowlers, smashing an unbeaten 50 off 33 deliveries.

That South Africa scored 106/8 was a remarkable feat in itself after they found themselves at 9/5 after 2.3 overs as Arshdeep and Chahar ran riot with the new ball.

But knocks from Aiden Markram (25), Wayne Parnell (24) and Keshav Maharaj (41) helped the visitors recover from the early collapse and put a respectable total on the board.

However, Rahul and Suryakumar hit half-centuries to take India home in 16.4 overs.