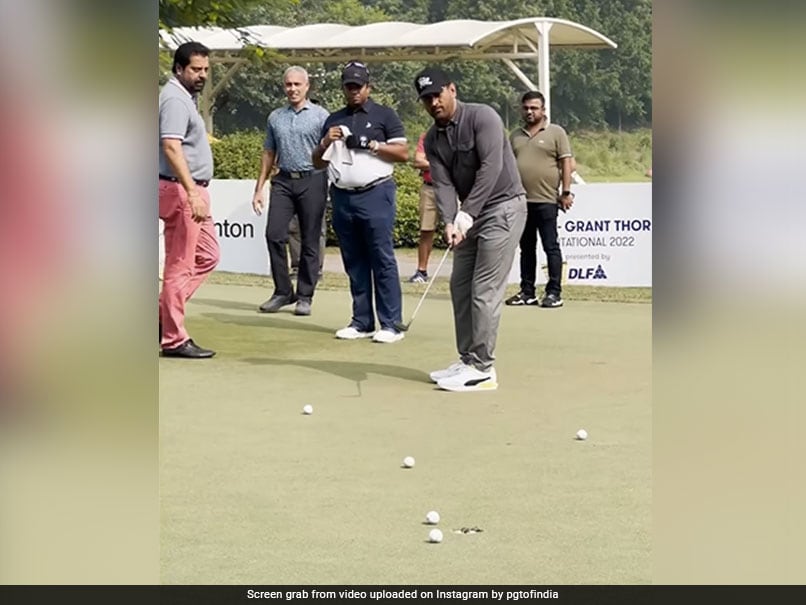 MS Dhoni tried his hands at the game of golf on Friday. The former India captain was invited by legendary cricketer Kapil Dev on the latter’s golf tournament – ‘Kapil Dev – Grant Thornton Invitational 2022’. The event shared a video on social media in which Dhoni could be seen playing golf. What made it all look more exciting was the fact that Dhoni used his batting calibre on the golf course. The wicketkeeper-batter swung the golf stick to take a shot in a similar manner as he does during his batting while trying to go for big hits.

Dev, who was also present at the venue, had earlier shared a picture alongside Dhoni. “When cricketers turn golfers,” he captioned the post.

Kapil Dev and Dhoni are the only Indian captains to win the 50-over World Cup. While India won their maiden title in 1983 under the captaincy of Dev, Dhoni had led the team to their second World Cup triumph in 2011 on home soil.

Dhoni, of course, was also the captain when India won the 2007 T20 World Cup title.

Earlier this month, both Dev and Dhoni were in attendance to watch the US Open quarterfinals between Carlos Alcaraz and Jannik Sinner. Kapil and Dhoni were spotted in the stands of the Arthur Ashe Stadium as the duo witnessed the five-set thriller between third seed Alcaraz, who went on to win the title, and 11th seed Sinner.

While Kapil Dev played for India from 1978 to 1994, Dhoni started his international career in 2004 and hanged his boots up in 2020. However, the latter was still active as a player in IPL 2022, playing for Chennai Super Kings.