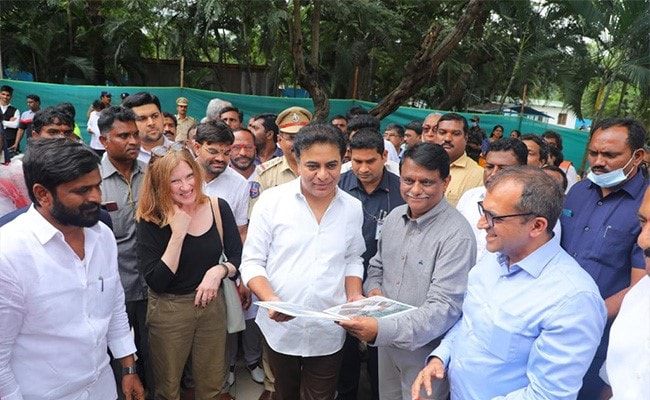 Newly-appointed United States Consul General Jennifer Larson and Telangana minister KT Rama Rao visited the historic Qutb Shahi Heritage Park Complex to mark the completion of a $112,560 (Rs 89.75 lakh) conservation project funded by the US Consulate in Hyderabad. The project is being executed by the Aga Khan Trust for Culture. It supports the conservation of five stepwells inside the complex, which will conserve 15 million litres of rainwater and supply water to the 106-acre Heritage Park.

“Hyderabad is not only a dynamic city with a bright future, it’s a historic city with a storied past,” said Ms Larson. “This is my first visit to the Qutb Shahi Tombs and it’s terrific to see first-hand how the Aga Khan Trust for Culture is leveraging US Consulate funding to conserve parts of this beautiful site.”

The Qutb Shahi Tombs Complex is the necropolis of the dynasty that ruled the region from 1518 to 1687. Hyderabad’s other major Qutb Shahi dynasty structures are the Golconda Fort and the 428-year-old ceremonial gateway Charminar. The Aga Khan Trust for Culture is working to develop these three sites in order for them to be recognised as UNESCO World Heritage Sites, an initiative spearheaded through a Memorandum of Understanding with the Telangana Government.

“The Qutb Shahi Tombs are among Hyderabad’s greatest historical legacies and that’s why the Telangana government is so eager to conserve and showcase this unique site,” said Mr Rao, Telangana’s Municipal Administration and Urban Development Minister. “The Aga Khan Trust for Culture’s excellent efforts and the US Consulate’s kind support are helping us make that happen.”

The stepwell renovation project is funded by the US Ambassadors Fund for Cultural Preservation (AFCP), which supports projects to preserve a wide range of cultural heritage around the globe, including historic buildings and archaeological sites. It is the third AFCP grant the Aga Khan Trust for Culture has received for conservation projects at the Qutb Shahi Heritage Park Complex.

Prior projects include a $103,000 initiative in 2018 for the conservation of the 17th-century tombs of Taramati and Premamati, as well as a $101,612 initiative in 2014 to document a series of underground structures such as a large mosque, a water tank, a summer palace, terracotta pipelines, a madrasa, aqueducts, walls demarcating a set of tombs and a gateway leading to the Golconda Fort.

“Conservation of these incredible 16thcentury stepwells at the Qutb Shahi necropolis has not only ensured conservation of extremely significant heritage buildings, but also made the complex sustainable in terms of its water needs. Our teams are honoured to work with the Government of Telangana and with a valuable grant from the US Ambassadors Fund for Cultural Preservation,” said Luis Monreal, Director General, Aga Khan Trust for Culture.