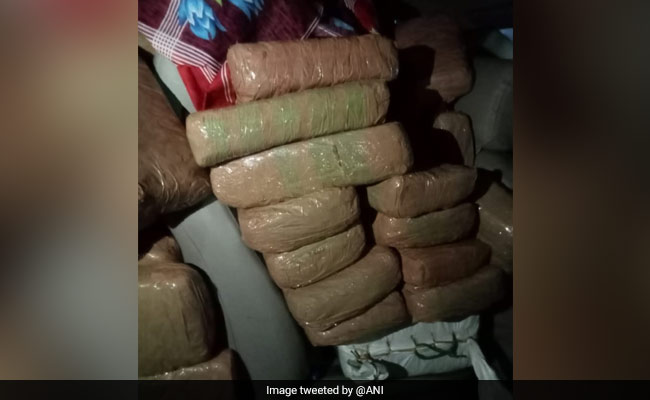 Crime Branch of the Delhi Police recovered 51 kg of psychotropic substance (marijuana), one transport vehicle, and arrested two accused who were engaged in the illicit trade on Sunday.

The accused have been identified as Salman and Talim, aged 27 and 24 years respectively.

According to Deputy Commissioner of Police (DCP) Crime Amit Goel, “A raid was organised upon specific input about transportation of illegal marijuana supply. A team was formed and a trap was laid near Shamshan Ghat, Old Seemapuri, Delhi. Further, as per information the transportation vehicle having 51 kg marijuana was intercepted by the team along with the accused”.

“The Vehicle has been seized along with recovered illegal Ganja (51 KG) and both the accused persons were arrested under provisions of National Development Planning Commission (NDPS) Act”, added the DCP

As per the police earlier, a cache of 51 kg marijuana was recovered from this gang and 03 persons were arrested.

The accused have been running in judicial custody since Feb 2022.

On sustained interrogation, the two disclosed that they smuggled the illegal marijuana from Ankapalli, Vishakhapatnam, Andhra Pradesh for supply at Delhi, NCR, and Meerut, Uttar Pradesh. The accused was remanded to police custody remand for 10 days and further investigation at the source of the substance is on.

Earlier in the day, a team of Special Cell/Northern Range busted an interstate drug cartel by arresting its key member namely Jasvir Singh. 45 Kg of opium worth more than Rs. 30 crores in the international market have been recovered from the possession of an arrested accused.

One truck, several mobile handsets, and several Subscriber Identity Module(SIM) cards used in the drug trafficking activities have also been recovered from them.

After thorough interrogation, Jasvir Singh disclosed that he was part of an interstate narcotics syndicate and was indulged in drug trafficking activities for the last 5 to 6 years.

Further, the spot interrogation of accused Jasvir Singh confirmed that the recovered opium was delivered to him by a Lenmingthang resident of Manipur on the directions of Dilbag who is a resident of Bazpur, Uttrakhand.

He further disclosed that Dilbag used to communicate with Lenmingthang via mobile phone and accordingly direct him to receive a supply of opium or heroin at various places in Assam and Manipur. He used to travel in his truck up to hilly areas of Manipur and Assam especially to procure opium from Lenmingthang. The accused told the police that he hid the opium between rice packets to dodge the law enforcement agencies.

5 Of Family From UP Found Dead At Rented House In Jammu And Kashmir: Police— News Online (www.googlecrack.com)