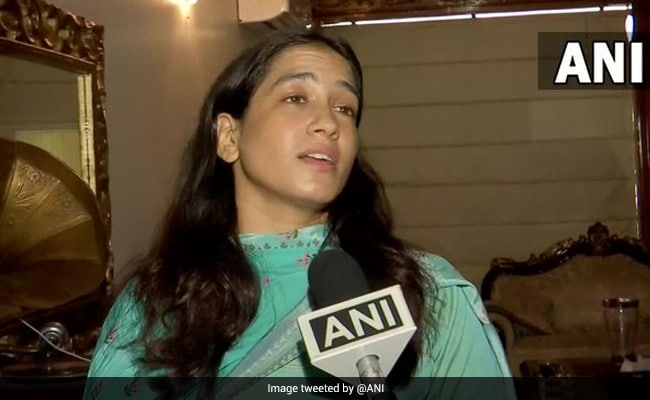 BJP’s local unit chief Manoj Gupta trashed allegations against Mr Sharma and urged Uttar Pradesh Chief Minister to order a probe by the CBI or an independent probe agency into this whole episode.

The allegations of Anu Tyagi against the BJP leader and Lok Sabha MP came during her address to theTyagi community members who had gathered in protest outside her Grand Omaxe society in Sector 93B Wednesday afternoon.

“My fight is with Mahesh Sharma alone. There is a threat to us from him and I need security,” she alleged.

Mr Sharma had reached the Grand Omaxe society on August 6 evening amid the controversy surrounding Shrikant Tyagi assaulting a woman resident of the society a day earlier over alleged encroachment by him.

Tyagi had till then claimed to be a BJP functionary while the party had denied any links with him in the wake of the controversy.

“At present, some videos are floated on social media in which sister Anu Tyagi is heard claiming threat to life from our MP (Sharma),” he said, adding Sharma is a doctor by profession and a popular public representative with no links to crime.

“It’s a conspiracy to malign the image of our MP. The BJP or its MPs do not harbour ill intentions against any community or caste. BJP belongs to everyone. We respect the Tyagi community as well as all other communities and value them,” he added.

Further, Mr Gupta said, “According to the wishes of sister Anu Tyagi, we request the Chief Minister through our party that an order should be passed for a probe into the whole episode by CBI or any other independent investigation agency.” He said his party or MPs do not do any work in public life out of any personal hatred or ill-will towards anyone.

“If any common citizen is harassed by any person or any government machinery, then our party and MPs are with him to protect their civil rights,” Gupta added.

Noida BJP spokesperson Tanmay Shankar told PTI that the request letter to the chief minister by Mr Gupta was yet to be sent.