HomeStatesBureaucrat Known For Headstands, Inspires Jail Inmates To Adopt Yoga In UP---...
States 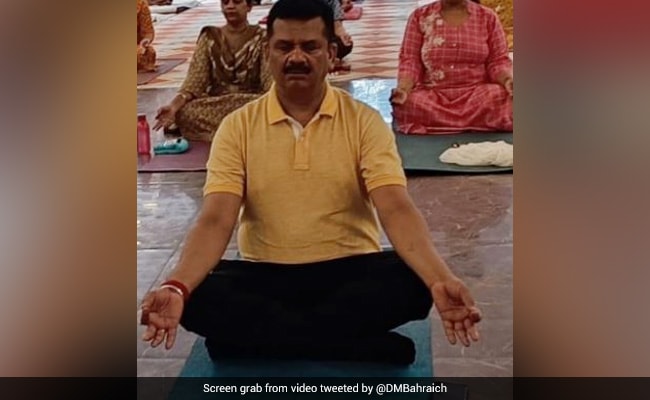 The District Magistrate himself performs various yogic exercises, including the headstand. (File)

The district magistrate in Uttar Pradesh’s Bahraich has been turning heads. His speciality: Headstands or “sirsasnas” that seem to go on forever.

District Magistrate (DM) Dinesh Chandra Singh has motivated inmates at the district jail in Uttar Pradesh’s Bahraich and encourages officials to include the age-old practice of yoga in their routine for healthy living.

“Whenever the district magistrate visits the jail he inspects the barracks and encourages inmates to practice yoga,” Jailor Anand Shukla said.

“He himself performs various yogic exercises, including the headstand, before inmates and asks them to adopt yoga for a stress-free living,” the jailor adds.

Mr Shukla says a majority of prisoners have made yoga a part of their routine now and they have been telling them about its benefits.

“For the past couple of months, the number of inmates falling ill has gone down,” the Jailor said.

Several officials say even during administrative interactions, they were made aware of the advantages of yoga and inspired to make it part of their life.

During visits to schools and colleges, he makes it a point to inspire students to adopt yoga.

The DM says he can perform long headstands extending up to an hour and has been invited by yoga guru Ramdev to his ashram in Haridwar.

“I started doing headstands for a shorter duration but the duration began increasing with practice. Now, I can comfortably do a headstand for close to an hour,” he said.

The DM says has helped him perform his duties in a better manner on various occasions.

Talking about an incident in 2019 when he was posted as the DM in Aligarh, Mr Singh recalled that a crowd of around 500 people called at a yoga programme was angry with the organisers and began protesting.

The officer says he went on the stage and performed the headstand. This calmed the crowd and they started practising yoga, said Mr Singh.

Apart from public performances, several videos of the DM performing the headstand are available online.

In one of the videos, he is seen performing the headstand for close to an hour.

Mr Singh said he is a devotee of Lord Hanuman and draws strength from him.