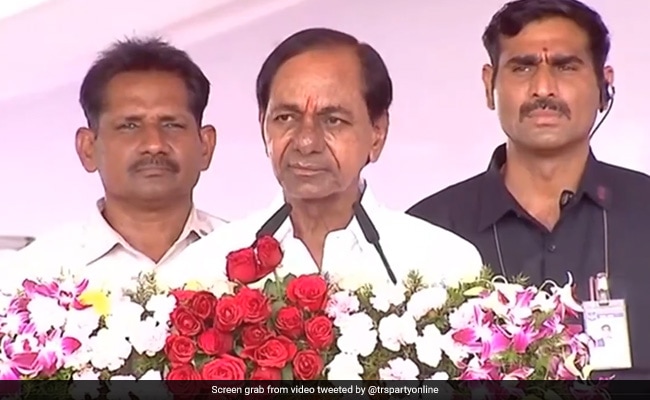 Telangana Chief Minister K Chandrasekhar Rao (‘KCR’) today accused Union Home Minister Amit Shah of “doing divisive politics” at a rally in Hyderabad, countering the BJP in a rally-versus-rally battle to mark the annexation of erstwhile princely state of Hyderabad by India in 1948. He said this while raising the demand — and virtually setting a deadline — for the BJP-led central government to okay 10 per cent reservation for tribal people in Telangana.

“The Bill (proposed law for 10 per cent tribal quota) is pending with the Centre. I am asking Amit Shah, who is doing divisive politics here; I am folding hands and asking PM Narendra Modi, whose birthday it is today, to please approve that Bill,” he said at a public function organised by the Telangana Rashtra Samiti (TRS) government. “Even the President of India is an Adivasi (tribal) woman. She won’t stop the move,” he added.

He then announced that his government will issue an order for the quota next week. “Will Narendra Modi accept it, or will he make it a noose around his neck?” he said.

KCR’s focus on tribal community demands — posing another question to the BJP government — is his latest move as he tries to gather Opposition forces at the national level for a united push in 2024. He even spoke of possibilities of going national himself: “People from Maharashtra came to me today and asked me to start a national party.”

Today was another day of Centre-state confrontation as both government celebrating the annexation day at different events. While the BJP-led Centre is calling it a day of liberation “from a cruel Nizam”, KCR’s government is marking it as ‘Telangana National Integration Day’.

Amit Shah, earlier in the day, took a swipe at “those who have turned their back” on celebrating the day “due to vote bank politics” and the “fear” of Razakars, a reference to the private militia who’d defended the erstwhile Muslim Nizam rule in a largely Hindu-majority state. This event was attended by several leaders, including Maharashtra Chief Minister Eknath Shinde.

When India gained independence, the Razakars called for the Hyderabad State — spread over present-day Telangana, and parts of Karnataka and Maharashtra — to either join Pakistan, or to become an independent dominion. But, on September 17, 1948, it was annexed into the Union of India in military action, credited mainly to the then Home Minister Vallabhbhai Patel.