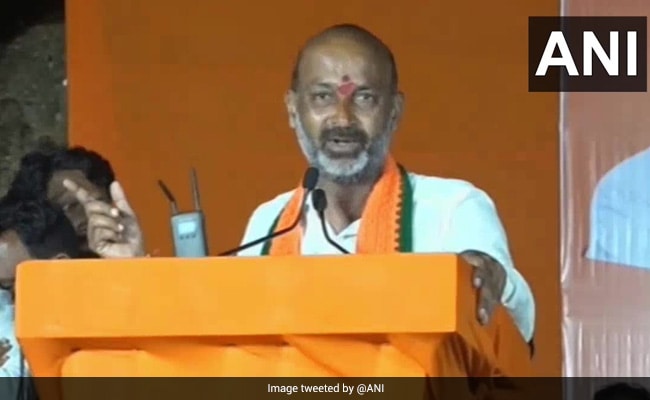 BJP Telangana President and MP Bandi Sanjay Kumar, while addressing the public at Dammaiguda on Monday, attacked Telangana Chief Minister K Chandrashekar Rao (KCR)-led Telangana government and said that the state government is on “ventilator” and will “collapse” soon.

Bandi Sanjay addressed the public after carrying out his Padyatra in the Medchal constituency. During this, he walked from Yapral to Dammaiguda, from morning to afternoon.

During the address, Mr Sanjay lashed out at the KCR government over the dumping yard issue in Jawahar Nagar and claimed that the TRS government is on the “ventilator”.

“The TRS government is on a ventilator and the government will collapse. The dumping yard issue is affecting the public’s health. BJP will take responsibility for solving the problem. I myself came here after Padyatra. If the CM had any love and respect, then he should have taken responsibility here. He should come and immediately take the responsibility,” Mr Sanjay said.

“KCR has mortgaged the Medchal RTC Depot and is building shopping malls there. Let me tell you three things to solve the dumping yard problem. Catch the TRS, tie them up near the dumping yard, and give the power to BJP. We will see how the dumping yard problem is solved. Shame on some collectors and police officers who praise KCR as Ambedkar. KCR is a person who is insulting the Constitution written by Ambedkar,” Mr Sanjay added.

The BJP leader further lashed out at KCR alleging charges of “rampant corruption”.

“For KCR family, ED means ‘covid’ and CBI means ‘leg hurts’. There is no registration for 7000 flats in Boduppal. There is no 100-bedded hospital or degree college in this area. Land grabs are taking place. The central government funds are being diverted and tractors are being bought for commissions and they are earning hundreds of crores of assets,” Mr Sanjay said.

The Telangana BJP president took a jibe at KCR by calling him “Dalit Bandhu” and accused him of not doing anything for the Dalits.

“TRS is the focal point of all mafias. I want to ask how many poor have been given double-bedroom houses in the Medchal constituency? How many unemployed here got jobs and unemployment benefits? Why are Dalits not being given three acres, “Dalit Bandhu”? Why has he not made a Dalit as Chief Minister?” Mr Sanjay asked KCR while addressing the public.

Mr Sanjay also accused KCR of talking about the Scheduled Tribes (ST) reservations because of the elections.

“In the Mungode by-elections, there are more ST votes, and that’s why he talks about ST reservation. He is trying to cheat people, he should answer why he has not given reservations to STs for 8 years? Even when an ST candidate Draupadi Murmu was chosen as the President, KCR didn’t want it,” said the Telangana BJP chief.

He requested the common people to give BJP a chance and invited them for a public meeting.

“The ‘Praja Sangrama Yatra’ is getting a special response and that’s why KCR is trembling out of fear and trying to block the Yatra. Give the BJP a chance. All of you are requested to come to the public meeting in Ibrahimpatnam on the 22nd of this month,” Mr Sanjay said.