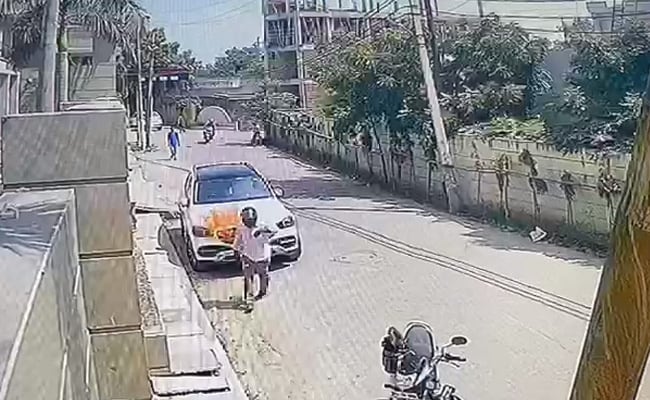 Grab from the CCTV video shows Ranveer running away after setting the Mercedes on fire in Noida.

A mason has been arrested for setting a Mercedes car on fire in Noida. The incident took place in Sector 45 and was captured on CCTV installed in the area. The worker, identified as Ranveer by the police, was angry allegedly after the Mercedes owner failed to settle his dues of Rs 2 lakh following installation of tiles at his house. The owner has, however, denied these claims. Ranveer has been arrested based on a complaint filed by the Mercedes owner, the Noida Police said.

The video shows Ranveer standing next to a motorcycle wearing a helmet. He waits for other people present in the area to leave and then moves towards the car.

The labourer then pours a flammable liquid on the car worth Rs 1 crore and sets it on fire. According to the police, the incident took place on Sunday.

The men present in the area alerted the owner of the car, but significant damage was already done.

The dispute dates back to 2019-2020, when Ranveer carried out some work inside the house in Noida. He claims that the dues were pending since then.

The family, however, has denied allegations of non-payment of dues, saying that they knew Ranveer accused for past 10 years. They instead accused him of being angry as he was replaced by another mason two years ago.

“We know Ranveer for the past 10-12 years, he was like a family member. We cleared all his dues when he went home during COVID-19 lockdown. We always make payment on the same day. His claim is laughable, that an amount of Rs 2 lakh was pending,” Ayush Chauhan, one of the family members, told NDTV.

“There was a wedding in our family and Ranveer was at home during COVID-19. So, we hired some other worker and got work done during that time. This infuriated Ranveer and he also threatened the new worker. But we didn’t know his true intentions,” Mr Chauhan added.

An FIR has been registered and further investigation is going on, the police said.