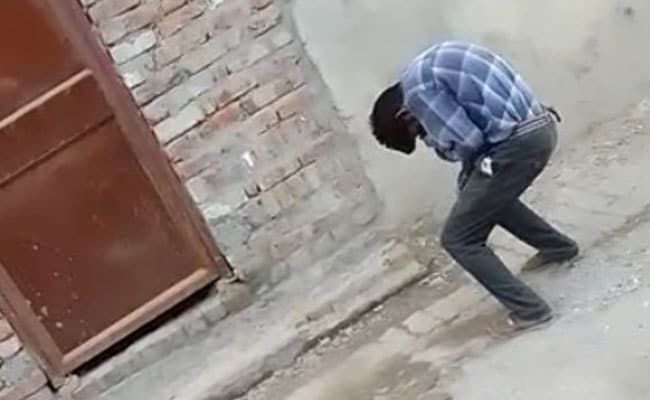 The video was reportedly shot in Chamrang road of the Amritsar East constituency.

Days after a video of a young woman allegedly under the influence of illegal drugs in Punjab’s Amritsar went viral on social media, another video of a young man in a stupor as he just stood on the road, has emerged from the Sikh holy city.

In the video, reportedly shot in Chamrang road of the Amritsar East constituency, the man can be seen slouching and struggling to move on the road. In the background, a person is heard saying that the person seems to be under the influence of smack, an illegal form of a strong opioid drug which is sometimes also called black tar heroin.

Earlier this month, a video of a young woman struggling to move on a road in the Maqboolpura area was widely shared online, following which the police carried search operation and arrested three people and recovered narcotic substances from their possession. According to reports, the family of the girl has abandoned her and she is now admitted to a de-addiction centre in Amritsar.

The locality is notorious for issues with drug abuse and addicts.

Maqboolpura, in the Sikh holy city, often makes headlines for incidents related to drug abuse. Many de-addiction ‘drives’ launched by the police have failed to yield the desired results.

At least 350 drug smugglers were arrested in raids conducted across the state earlier this month. according to the state police. The police recovered 6.90Kg heroin, 14.41Kg opium, 5Kg ganja, 6.44 quintals of poppy husk, and 2.10 lakh tablets, capsules, injections and vials of Pharma opioids during the raids that were conducted in a week. Rs 4.81 lakh drug money was also seized after search operations in drug-affected areas besides randomly searching vehicles at vulnerable routes across the state.