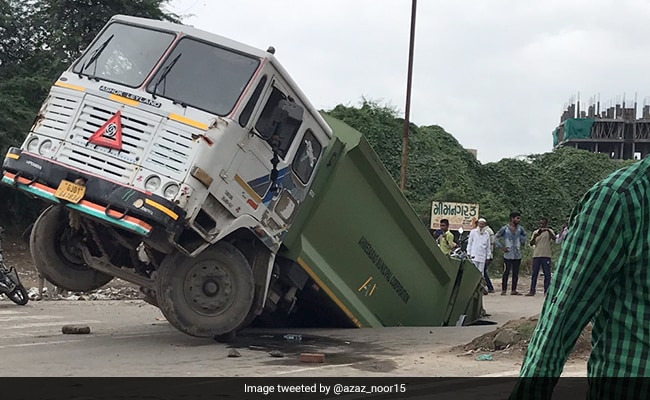 This was the 92nd cave-in to have been reported in Ahmedabad after July 10.

A road near Ahmedabad’s Juhapura area caved in on Wednesday afternoon and led to Ahmedabad Municipal Corporation’s (AMC) garbage truck falling into the crack.

A photo of the giant truck stuck inside the ditch has since surfaced on social media. “How bad is the condition of our road.. No one is going to see,” the caption of the Twitter post read.

Take a look below:

How bad is the condition of our road no one is going to see…@AmdavadAMC#ahmedabad#juhapurapic.twitter.com/TFAb9YgV5I

The incident happened on one of the main drainage trunk pipelines. According to The Indian Express, the truck was pulled out with a crane and the road was barricaded for repair. The authorities stated that the exact reason for the collapse can only be asserted after a detailed assessment.

As per the outlet, this was the 92nd cave-in to have been reported in Ahmedabad after July 10. The AMC officials have repaired more than 80 of them, while work on eight is still under process.

Meanwhile, this comes after a newly constructed road near Surabhi Park in the Vastral area was caved in after heavy rains. In another similar incident, an entire car went down to a crack in the Shahibaug area.

According to local media reports, the state government has ordered the AMC to immediately repair all the major roads in the city on a war footing. The official direction came as the National Games are scheduled to kick start from the city later this month. Roads leading to the airport, Narendra Modi Stadium, Kalupur Railway Station and Sabarmati Riverfront will be taken up on priority.