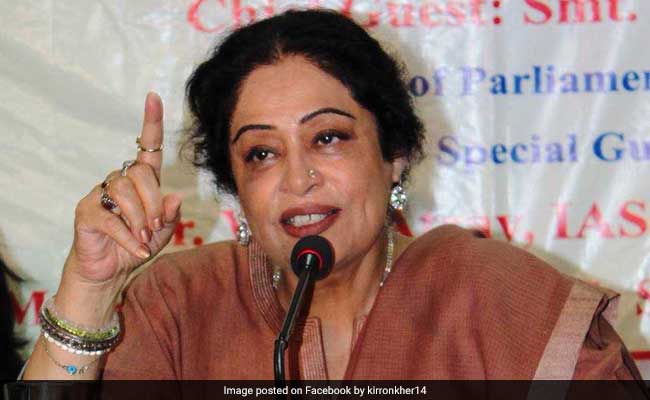 Chandigarh MP Kirron Kher has reacted to the ongoing developments at Chandigarh University that erupted after the alleged leak of ‘objectional videos’.

Kirron Kher took to Twitter and condemned the incident. She clarified that the university doesn’t fall under her constituency, instead, it is in Punjab. Thus implying that the Bhagwant Mann-led Punjab government should act swiftly in this regard.

Kirron Kher wrote, “I am morally shaken by the ghastly incident at #ChandigarhUniversity. The name of my city is being tarnished due to this institute. I want to clarify that it is based in Kharar, Punjab. My heartfelt concern goes out to the girls & their parents who are a victim of this incident.”

I am morally shaken by the ghastly incident at #ChandigarhUniversity. The name of my city is being tarnished due to this institute. I want to clarify that it is based in Kharar, Punjab. My heartfelt concern goes out to the girls & their parents who are a victim of this incident.

Meanwhile, Deputy Inspector General of Police (DIG) GS Bhullar spoke to the protesting students late on Sunday night and tried to pacify them, saying “implicit faith is necessary” and “law is being followed”.

“We will keep coming to you, implicit faith is necessary,” said DIG GS Bhullar.

DIG Bhullar told ANI that there was a communication gap earlier, and the police are trying to bridge that.

“The issue has been of communication gap. We have been clarifying again and again. We are assuring students that law is being followed and all legal procedures are being undertaken,” DIG Bhullar said.

The Mohali Deputy Commissioner (DC) Amit Talwar also informed that there had been no information about suicide so far.

Earlier on Sunday, one person was arrested while another was detained in connection with the alleged leaked objectionable videos of Chandigarh University students.

The arrested accused has been identified as Sunny Mehta. The youth belongs to a local village under the Rohru Sub division of Shimla district, nearly 130 km away from the northern town.

The other detained person has been identified as 31-year-old Rankaj Verma.

Both the accused were nabbed by a team led by Dr Monika, Superintendent of Police, Shimla and were handed over to Punjab Police from Rohur and Dhalli police stations respectively.

“Punjab Police has arrested and has left with the accused from Rohru in case FIR no 194/22 dt 18/9/22 u/s 354C IPC, 66E IT act PS Sadar Kharad Punjab. The 23-year accused, resident of Rohru has been handed over to them,” read a statement of Shimla Police.”

“Punjab Police reached PS Rohru in Shimla. The accused Sunny Mehta has been handed over to them. Zero tolerance for crime against women. If any collateral evidence comes our way, we will take action as per law,” said Director General of Police Himachal Pradesh, Sanjay Kundu.

“It is a matter of videos being shot by a girl student and later circulated. FIR was registered in the matter and the accused student was arrested. No death has been reported related to this incident. As per medical records, no attempt (to commit suicide) was reported,” said Senior Superintendent of Police, Mohali Vivek Soni on Chandigarh University row.

“Forensic evidence is being collected. So far no attempt to suicide has been reported. Medical records of students have been taken on record. People should not pay attention to any rumours,” the police said.

Punjab School Education Minister Harjot Singh Bains had appealed to Chandigarh University students to remain calm and assured them that the guilty will not be spared.

“I humbly request all the students of Chandigarh University to remain calm. No one guilty will be spared. It is a very sensitive matter and relates to the dignity of our sisters and daughters,” said the minister in a Twitter post.