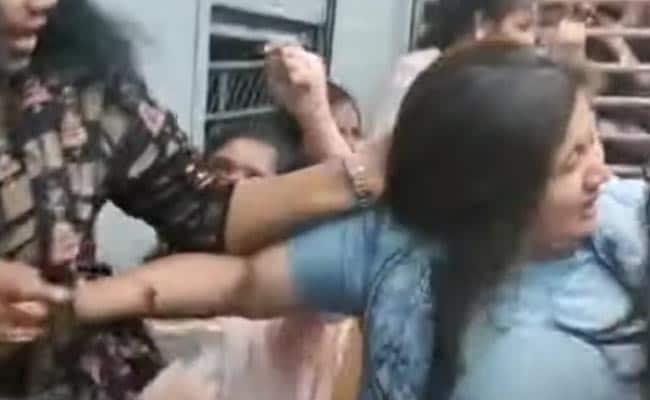 Women passengers fight on a Thane-Panvel local train in Mumbai

The women’s compartment of a Mumbai suburban train yesterday witnessed an ugly brawl between co-passengers, with some women coming to blows and even injuring a policewoman on duty.

In a video that went viral on social media, women can be seen clashing with each other inside the ladies’ compartment of a Thane-Panvel local train.

According to Police Inspector Sambhaji Katare from Vashi Government Railway Police (GRP), the trigger for the clash was an altercation between three women passengers over a seat near Turbhe Station. The matter then escalated into a fight as more women got involved in the brawl.

In the video, some women passengers can be seen running over the seats to safety as a free-for-all broke out inside the carriage.

Mr Katare said Vashi GRP was investigating the incident and a case had been registered.

According to the police, when a seat got vacant at Turbhe Station, one woman passenger tried to let a second woman take the seat. However, a third woman also tried to occupy the same seat. This resulted in a heated argument between the three women who started hitting each other. Soon, some of the other passengers also got involved in the brawl, resulting in an ugly scene inside the compartment.