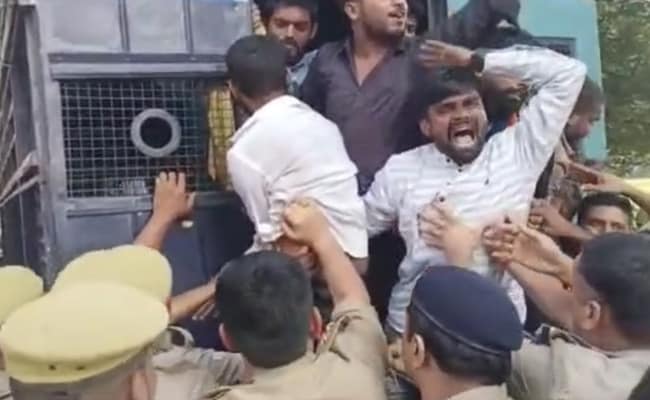 Police today took some of the agitating students at University of Allahabad into custody after they blockaded two of their professors during protests over a 400 per cent hike in fees. The agitating students blockaded Chairman Admissions, Professor Ashish Saxena, and Professor Manmohan Krishna, Advisor to the Vice-Chancellor, and closed the main gate after Professor Krishna arrived at the Faculty Recruitment Cell (FRC) to hold talks with the students.

The students demanded that all admissions procedures be stopped at the university until the fee-hike issue is sorted. While they claimed to have taken the professors “hostage”, the professors denied it, saying they had sat down for discussions with the students.

A huge ruckus broke out as police tried to take some of the agitating students into custody and push them into police vans for them to be taken to the police station. Police resorted to a lathi-charge as the students tried to violently resist detention.

Santosh Kumar Meena, the Superintendent of Police, later said that no one was taken hostage. However, police had to intervene and two dozen students were taken into custody after they barged into the FRC office and blocked traffic on the route.

Santosh Kumar Meena, Superintendent of Police, said police had to intervene after students entered the FRC office and blocked traffic on the route

Reacting to a query on whether the detained students will be arrested and legal proceedings initiated against them, the SP said the matter was under investigation.

The agitation over fee hike reached its 26th day today, with some students observing a fast-unto-death until a rollback is announced, though the university administration has ruled out any such possibility.