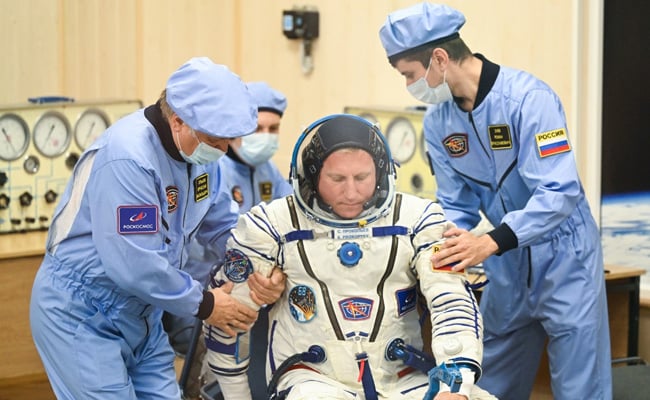 Footage showed the cosmonauts being helped as they become used to the effects of gravity again.

Oleg Artemyev, Denis Matveyev and Sergey Korsakov landed at the scheduled time of 1057 GM, 148 kilometres (91 miles) southeast of the town of Zhezkazgan.

Footage broadcast by Roscosmos showed the cosmonauts being helped from the Soyuz descent module, as they become used to the effects of gravity again.

During their 195 days aboard the station, the crew completed multiple experiments and five space walks, Roscosmos said.

The three-person crew blasted off to the ISS to begin their mission in mid-March, weeks after Moscow sent troops into Ukraine starting what it called a “military operation”.

In July, Roscosmos posted a photograph of the trio aboard the ISS holding flags of the Kremlin-backed breakaway Lugansk and Donetsk regions to voice support for Moscow’s troops in eastern Ukraine.

Their return to Earth comes as four Moscow-held regions of Ukraine — including Lugansk and Donetsk — call on President Vladimir Putin to formally annex the territories into Russia following hastily organised votes that the West says were a sham.

In response to Russia’s military campaign in Ukraine, Western capitals have hit Moscow with unprecedented sanctions, including on the aerospace industry.

However, despite simmering tensions, space remains one of the last remaining areas of cooperation between Moscow and Washington.

Last week, NASA’s Frank Rubio and Russia’s Sergey Prokopyev and Dmitry Petelin launched to the ISS from the Baikonur cosmodrome in Kazakhstan on a Roscosmos-operated spacecraft.

Meanwhile, Russia’s only active female cosmonaut, Anna Kikina, is expected to travel to the orbital station in early October aboard a SpaceX Crew Dragon.

The ISS, a collaboration among the US, Canada, Japan, the European Space Agency and Russia, is split into two sections: the US Orbital Segment, and the Russian Orbital Segment.