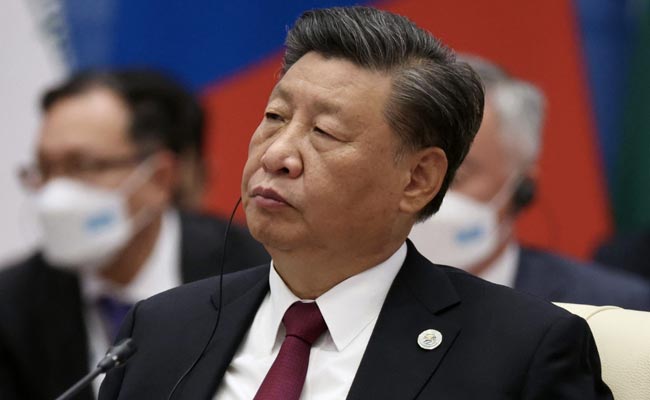 Chinese President Xi Jinping on Friday asked SCO member states to guard against “colour revolutions” instigated by “external forces” and asked them to maintain strategic independence and safeguard regional stability, in a veiled attack on the US as it expands its influence in the Indo-Pacific region.

Addressing the 22nd SCO summit here in the historic Uzbek city, Xi also announced plans to establish a centre in China to train counter-terrorism personnel by the grouping and mooted a development bank to speed up regional economic integration.

Xi congratulated India for taking over the rotating Presidency of the Beijing-based eight-member regional grouping.

“Here I wish to express China’s congratulations to India on assuming the next SCO presidency. We will, together with other member states, support India during its presidency,” he said at the summit, also attended by Prime Minister Narendra Modi.

“The once-in-a-century pandemic has continued unabated. Regional conflicts keep flaring up. The Cold War mentality and group politics are resurfacing, so are unilateralism and protectionism. Economic globalisation has encountered headwinds,” he said in a thinly veiled attack against the US.

Under these new conditions, the SCO, as an important constructive force in international and regional affairs, should keep itself well-positioned in the face of changing international dynamics, strengthen solidarity and cooperation, he said.

“We should guard against attempts by external forces to instigate “colour revolution”, jointly oppose interference in other countries’ internal affairs under any pretext, and hold our future firmly in our own hands,” Xi, also the general secretary of the ruling Communist Party, said amid Washington’s growing confrontation with both Beijing and Moscow over a range of issues.

China claims nearly all of the disputed South China Sea, though Taiwan, the Philippines, Brunei, Malaysia and Vietnam all claim parts of it. Beijing has built artificial islands and military installations in the South China Sea. The US has been regularly contesting Beijing’s claims by sending warships to the strategically vital Indo-Pacific region.

He has also announced new initiatives for the SCO.

China will provide developing countries in need with emergency humanitarian assistance of grain and other supplies worth 1.5 billion RMB yuan, (USD 105 million).

“We need to ensure the implementation of the roadmap for SCO member states to expand shares of local currency settlement, better develop the system for cross-border payment and settlement in local currencies, work for the establishment of an SCO development bank, and thus speed up regional economic integration,” he said.

Next year, China will host an SCO ministers’ meeting on development cooperation and an industrial and supply chains forum, and will set up the China-SCO Big Data Cooperation Center to create new engines of common development, Xi said.

China stands ready to carry out space cooperation with all other parties and provide satellite data service to support them in agricultural development, connectivity and disaster mitigation and relief, he said.

China will build a China-SCO ice and snow sports demonstration zone and host the SCO forums on poverty reduction and sustainable development and on sister cities next year. In the next three years, China will carry out 2,000 free cataract operations for SCO member states and provide 5,000 human resources training opportunities for them, he said.

“Member states need to advocate the vision of common, comprehensive, cooperative and sustainable security and reject any attempt to create bloc confrontation and damage regional stability,” he said.

Xi said “bearing in mind the security needs of countries in the region, they should build consensus on security cooperation, and work together to protect sustained stability and security in the region.” The SCO should enhance its law enforcement cooperation and prevent terrorist and extremist forces from jeopardising regional security.

Over the years, the SCO has developed a counter-terrorism force called Regional Anti-Terrorist Structure (RATS) which was regarded as one of the organisation’s main strengths.

Security concerns in the South and Central Asian region increased after the Taliban took control of Afghanistan following the sudden withdrawal of the US troops amid reports that Al Qaida and Islamic State militants regrouped in the war-torn country.

“We should ensure that the SCO-Afghanistan contact group and the mechanism of coordination and cooperation among Afghanistan’s neighbours continue to play their roles; and we should encourage Afghan authorities to establish a broadly-based and inclusive political structure and remove the ground that breeds terrorism”, Xi said “We should continue to carry out joint anti-terrorism exercises, crack down hard on terrorism, separatism and extremism, drug trafficking as well as cyber and transnational organised crimes; and we should effectively meet the challenges in data security, biosecurity, outer space security and other non-traditional security domains”, he said.

He said China supports the expansion of SCO. Iran has already been admitted as the ninth member of the grouping.

China supports advancing SCO expansion in an active yet prudent manner, and this includes going through the procedure to admit Iran as a member state, launching the procedure for Belarus’ accession, admitting Bahrain, the Maldives, the United Arab Emirates, Kuwait and Myanmar as dialogue partners, and granting the relevant applying countries the legal status due to them, Xi said.

He also spoke of next month’s Congress of the ruling Communist Party of China, (CPC) which is widely expected to endorse an unprecedented 3rd five-year term for Xi. All his predecessors retired after two terms.

The 20th National Congress will draw up a blueprint for China’s development in the next stage, Xi said.