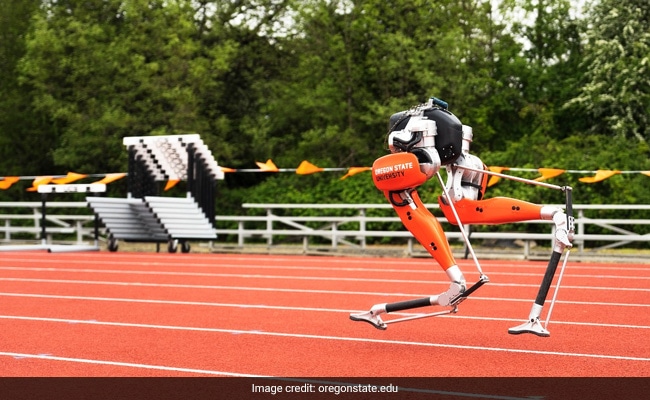 The robot has been developed after years of research.

A robot developed by Oregon State University (OSU) in the United States has set a new Guinness World Record by running 100 metres in 24.73 seconds. The university said in a release that mechanised sprinter Cassie broke the record for the fastest 100-metre dash by a bipedal robot. It further added that Cassie clocked the historic time at OSU’s Whyte Track and Field Centre, starting from a standing position and returning to that position after the sprint, with no falls.

The race took place in May this year, the university further said in the release.

Interestingly, the robot is completely blind with no camera or sensors attached to the body. “The robot has knees that bend like an ostrich’s,” said the OSU release.

The robot was developed under the direction of Oregon State robotics professor Jonathan Hurst, the university said.

“We have been building the understanding to achieve this world record over the past several years, running a 5k and also going up and down stairs,” said graduate student Devin Crowley, who led the world record initiative.

“Cassie has been a platform for pioneering research in robot learning for locomotion,” the student added.

According to Guinness World Record, the record required the robot to start in a standing pose and return to that pose after crossing the finish line. It was not supposed to simply run 100 metres and crash.

It further said that due to the realistic nature of the task, establishing this record is a concrete milestone in robot locomotion and real-world capability.