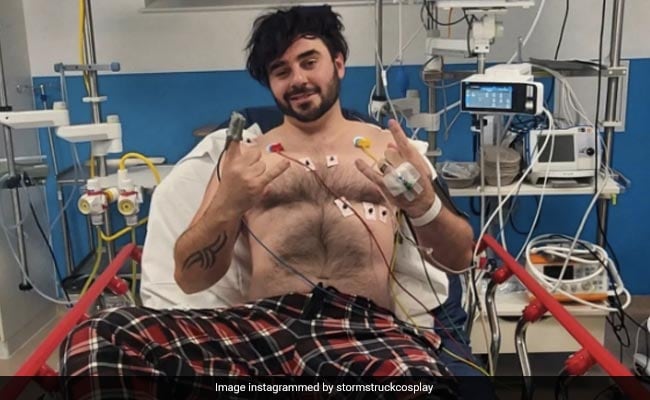 Picture shows Mr Rowan being monitored in hospital after getting struk in lightening.

This is the story of an incredibly lucky man who survived a lightning strike. The UK man has been left with just scars on his right arm after the accident. Surprisingly, the lightning strike took place when he was playing video game in his living room, according to a report in Oxford Mail.

Aidan Rowan was playing on his PlayStation on Monday, September 5, when he heard a loud crack and felt a heavy sensation in his body at 10:30pm, the outlet further said.

The 33-year-old who resides in Abingdon, England, was taken to the John Radcliffe Hospital, where staff members said it looks like he has been hit by lightning.

Mr Rowan was allowed to go back home with a few medications after being kept in monitoring for eight hours. “I was on the sofa playing a game where you play as a stray cat and it was thundering outside,” he told Oxford Mail.

“There was a very loud crack of thunder and I sort of felt a very heavy sensation all over and then a searing heat in my right arm where there are now burns,” the man added.

“It took about a minute to come back to my senses, I felt very, very confused. I went upstairs and asked my husband for a wet towel as I didn’t know what had happened but my arm was burning,” Mr Rowan further said. His heart rate was erratic at earlier but got normal after few hours.

In addition, he stated that doctors thought lightning “bounced off the water and through the window” because of the hot weather’s effect on the ground’s roughness, which caused rainfall to collect on top.

He has also shared a post on Instagram, along with a photo of himself in the hospital. He has also mentioned that he is not going to play cute cat games during a thunderstorm again.

Jennifer Lopez Talks About Her Breakup With Ben Affleck, Says “I Was Going To Die”— News Online (www.googlecrack.com)

FIFA World Cup, Qatar 2022, England vs Wales, Iran vs USA, Group B: When And Where To Watch Live Telecast, Live Streaming | Football...

FIFA World Cup, Qatar 2022, England vs Wales, Iran vs USA, Group B: When And Where To Watch Live Telecast, Live Streaming | Football...

Jennifer Lopez Talks About Her Breakup With Ben Affleck, Says “I Was Going To Die”— News Online (www.googlecrack.com)