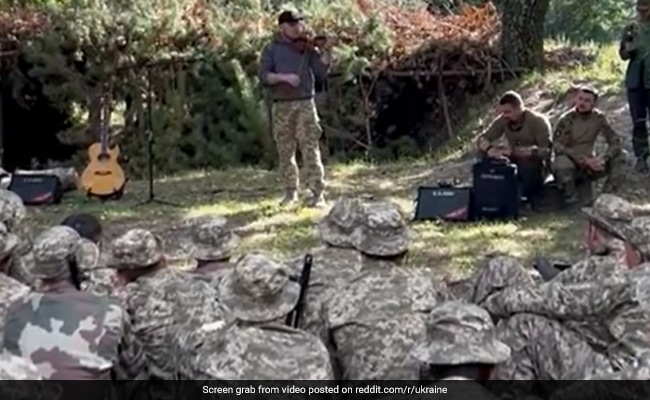 Amid war, Moysey Bondarenko, a professional musician serving in the Armed Forces of Ukraine has taken the responsibility of keeping the spirits of their comrades high by playing beautiful melodies. A Reddit user by the name of Migoodenuf has posted a short clip on his account, showing a beautiful version of American singer Billie Eilish’s Lovely on violin by a soldier.

In the video, a big group of soldiers can be seen sitting on the ground, listening to music played by violinist Bondarenko. The heartstring-pulling video is making the internet smile and appreciating Mr Bondarenko’s effort of keeping the comrades distracted from the ongoing Russia-Ukraine war.

The video was posted on September 16 and so far it has received 99,000 upvotes and 68 comments.

Internet was impressed with Mr Bondarenko’s efforts. A user wrote, “Surreal and beautiful – Like the hearts and souls of all the defenders,” another user wrote, “This scene will be in the movie they make about this war. Beautiful.” “Beautiful and amazing music. The violin can be both haunting and uplifting in the hands of a master like Moisei,” the third comment read.

In an old interview, Mr Bondarenko in an interview with Zenger News talked about his love for music and how he ended up in the army, “Most of my neighbours in the village were gypsies, they are insanely musical people, they spend all the time with guitars, singing songs.”

“At the age of 17, I graduated from school, left for Kyiv and entered the Kyiv National University of Culture and Arts. Before the war, I lived in Kyiv and was in an orchestra. We were supposed to perform a concert in Mykolaiv when the war broke out.

Bondarenko told Zenger News: “I was inspired to sign up for the army by Alexander Yarmak, a Ukrainian musician and family man who volunteered for the war in the very first days without any hesitation.”